HomeMobile AppsHow To Hire An App Developer For Your Startup business & How much does it cost? 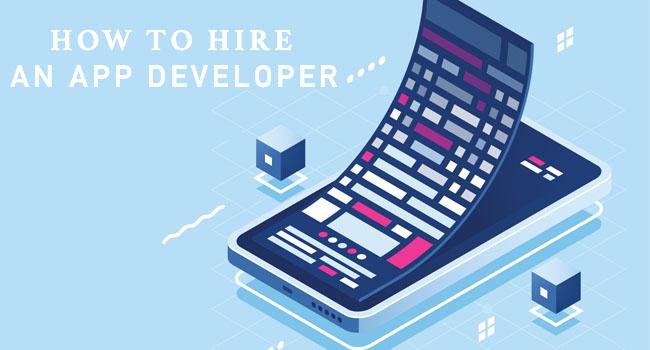 How To Hire An App Developer For Your Startup business & How much does it cost?

The problem we face hiring an app developer is our technical knowledge. Over the internet, if you search how to hire developers for a startup, most of the articles suggest you learn to code because the only expert knows the real value of other experts. But we value the entrepreneur like you guys and believe that hiring a mobile app development team will be a lot easier for you with proper guidance. I just need some basic knowledge of tech.

Creating a product from the ground level seems exciting and challenging. Though you have a unique idea, it doesn’t mean you will surely be succeeded. The idea is going to work only when you’ll have the right people. It seems easier to find an app developer when you have a team, but hiring the app developer never sounds effortless without a team.

Steps of Hiring an App Developer

Here, we’ll discuss the process you need to follow. These steps are less about an app developer but more about how your approach should be before hiring an app developer.

Startup business always demands to know what you need from the project. You must know the question to ask an app developer. So don’t get so much worried about hiring the developer until you are so sure about the idea. So how can you be so sure?

We all know UX design is well-known for laying a model design like a blockchain application. I guess you already know what I am talking about. Yeah, I am talking about a model which you have to make and show the expert app developer.

As mentioned, you need a concrete prototype to show your developers to get them the ideas about if the programming is within their knowledge. Laying this framework will ease down the tension between you and the developers.

If you are pretty new in this app development business, I guess you don’t know about the breakdown. It’s a normal process during developing an app. The app developers demand to know the user’s experience. But before that, don’t forget to list down your demand from the app developer.

Here is an important fact to ensure, as the app you want to develop must have both admin and user-facing components. So, make sure the person you are going to hire will work on both.

. You don’t necessarily need all the features from a similar app. Go through similar apps and ask yourself what you like and dislike about them. Then enlist your features.

What to Look in App Developers

App developers are the ones who bring life to your ideas. They have their brain and hands. But hiring comparatively less experienced app developers will turn into pain for you. So it’s time to discuss the things you should look for in an app developer.

Look over their Qualities

Remember, you are also comparatively new at this business, and how to find a developer for your startup will be a major question mark for you. Surely there will be hundreds of resumes in your inbox, and maybe you don’t have anyone for you to justify those resumes. But it never means you have to find one randomly.

So mark out the priorities first. Priorities like what technology you are looking for? Does it require so many skills? Do you want an experienced candidate and what them to lead you or follow you? Also, try to understand the personality as much as possible from the resume.

It’s really important to know how passionate your future app developer can be. Suppose the app developer started his/her career as a web page designer using WordPress or a content writer, and now, he/she has shifted in app development. In that case, it only means the candidate wants to go up using the ladder. It shows passion.

Here is another thing you should look through the resume. The candidate who sent you the resume only for money, you’ll not get the previous job descriptions properly into his/her resume. Only some dry titles and dates.

How much does an app Developer cost?

It depends on building quality. Obviously, an experienced one will build you the best quality app, but he/she will surely cost more than average. But for your convenience, we have researched the cost.

For simple apps like calculators, the camera may cost $2,000 per platform. For basic apps, it may cost up to $3,000, and for complex apps like uber and social media, it may cost $20,000+. Freelance android developer rates are on average $30+ hourly, which can rise to $50-$100 per hour as a freelancer ios developer rate.

Where can I hire startup developers?

– Devsyntech : Has experience developer to develop a mobile apps & website. They delivered good amount of projects.

How many developers do I need for a startup?

– Establishing a mobile app doesn’t require more than 5-6 developers. They can make the app user-friendly. But for a startup, you need max two developers because too many developers will suggest to too many things. Which may hamper the real progress of app development.

So far, I have talked about how to hire developers for a startup. You can hire an app developer either face-to-face or through an online platform. Though online platforms offer less cost and save time, when it is time to communicate, I don’t think anything can be better than seeing your employee is actually working.

How To Develop A Successful B2B Mobile App? Check Our Premium Guidelines Now